This morning I was given this nugget during my daily practice about the philosopher' stone… and although I have wondered for years what it is exactly … in the moment it came I was not searching for it. It came, as is so often the way, as a “download.”

Figuring out exactly what the “philosopher's stone” of Alchemy lore has occupied wise men/philosophers for centuries. There are complicated, arcane drawings, and paintings, and notations made on the subject by some of our greatest artistic creators. Men such as Galileo, Pythagoras, Leonardo Da Vinci, and Carl Jung, to name only a few of the many who are credited with great things. Some famous Alchemists thought, perhaps it was St Germaine (can't remember at this moment) who said even that the ‘philosopher's stone' is right in front of us, right beneath our very noses … and yet it still eludes the majority of us.
It is said that such information is to be held secret and that it can only be passed on when the student is ready …  and yet I do not worry about this taboo, trusting that what comes to me is to be shared … I serve as a mere messenger – that is all. Besides I simply report what comes to me, and trust that those to whom the message is intended will be those who “get it.”
Besides I do not claim to know anything, and I certainly do not profess to be an Alchemist – although Alchemy IS happening in me (i.e. the base metal of old beliefs turning into the refined golden consciousness) as I am changed by Source flowing through me – I am a conduit, a channel who is willing to be used as a messenger for Reality.
But still the question: “What IS the philosopher's stone?”

This morning, standing aligned and stretching for Source, I heard the words enunciated syllable by syllable in my mind, as if for emphasis on the words … and realized that the words themselves really tell it all! “Phi-los-o-pher's St-one … “Oh,” I thought, the meaning is defined in the name itself! It is the stone of the philosopher! And images started tumbling in …

The “Philosopher's Stone,” it occurred to me, may be the outcome – the concrete form completed – of that which we consciously intended, and BELIEVED into being. It is the refined substance of that in us that we have been collaborating with Spirit to co-create. It is the finished product of a highly refined consciousness … it is the physical evidence of the inner work we've been doing, or perhaps truer to say, that has been done in us!

The Philosophers Stone is the three-dimensional, condensed energy our thoughts and beliefs take on when the Laws of Mentality/Co-Creation/Manifestation are applied.

When we fully align with the Universal Intelligence, and consciously set our intentions by CHOOSING who we want to be in right alignment with that Source, that which we desire to give our time, energy, and attention to in service to that Source, we become filled with the fiery energy of a Source that says nothing is impossible, and we get to experience through us that Co-creating Energy refining us and transforming us into THAT.

There are eight stages of refinement in the Alchemical process that defines the journey we each travel as we co-create with Source the “Philosopher's Stone.” I'll tell you about those next post! 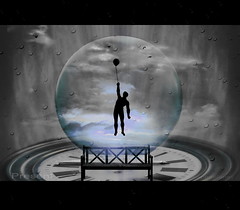 Each “self” has its own way of connecting with Source. The mental body likes to meditate and think on God … the emotional self wants to feel an intimate relationship with Source so ritual and song, chanting and bliss generating meditations are designed to allow the emotional body ways to “worship” Source. The physical responds well to yoga, tai chi – even belly dance becomes union with Source when we set our intention on spiritual alignment as we move.

It doesn’t matter whether your daily practice consists of prayer or zen sitting, yoga, Tai chi or ecstatic dance, art, reading or writing prose, studying Biblical verse or the Vedas – whatever brings you into a deeper spiritual connection counts. Combine any of the many alignment techniques into a practice that works for you and then commit to it. Your spiritual practice shapes the inner vessel that navigates you through the emotional waters of life to a place of new possibility based on a relationship of oneness with Source.