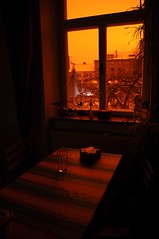 I was tossing and turning during the wee hours of the night a while back. (I've found that the early AM hours are the time when the ego does its worst work.) This sort of sleeplessness has assailed me before. I awaken abruptly and lie there for hours completely overrun with thoughts like, “what if this happens or what if that doesn't work?” -the kind of thoughts that don't even occur during day time hours but feel overwhelming at night. My habit in the past has been to lie awake feeling completely at the mercy of such thoughts and pray for daylight so that I can escape them into my busy schedule.

But this time was different.

This time when the ego voice awoke me at 3 AM and started in on its predictable rant I recognized its voice and didn't take it quite so seriously. It still held sway for awhile, going on about about how dire my life situation is, but this time I didn't lose sight of who it was in me that was carrying on with such nay-saying. I decided to ask for help.

I sat up in bed, turned on my bedside lamp and reached for the bible which happened to be lying on a table near by. I sat with the bible on my lap a few minutes and asked to be guided with words that would help me deal with the negative fear-mongering ego that lives in my own head. I closed my eyes and opened the bible.

When I opened my eyes the first words I saw was the beginning of a psalm that said, “Praise the Lord.”I felt an immediate relief upon reading the words and thought, “OF COURSE that's the answer to ego's ranting!”

Praise generates gratitude; it uplifts the spirits and raises our vibrational frequency to a higher vibratory level that attracts love and abundance. Gratitude defeats ego completely because it is of a much higher frequency. Ego cannot thrive in the high vibrational frequency generated by praising Source.

With that awareness in mind, I started whispering an improvised song of thanksgiving for the over flowing abundance in my life. Peace and quiet joy descended. I did not go back to sleep. I did not need to. I was so filled with gratitude that I felt eager to start my day. And it turned into a wonderful day – as days generally are when I start out in an attitude of gratitude.

What is the lesson? Simply this; gratitude is the antidote for fear or any stressful feeling. Use it ceaselessly. 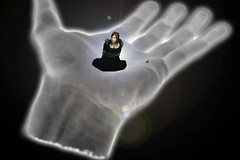 The next time anxiety producing thoughts threaten to take you down, remember that it is the ego that produces fear – always. and turn to thoughts of gratitude immediately. Find reasons to be grateful in everything you do and in everything that happens. Refuse to hang out with the dark thoughts of an angst producing ego and you will find yourself held in the hands of an abundant universe.

When we are spiritually mature, we live at the dividing line, within ourselves and out in the world, between polarized opposites – between black and white, right and wrong – right where any polarized notion, position, or viewpoint meets the other point of view.

Through our maturing process, we move in towards the centerline where the opposites meet  (and often  clash) and away from the rigid outer extreme of our convictions. We travel away from the radical outer edges of our unquestioned assumptions about how life is …  and closer to the frontline of the “war zone between opposing forces.”  Part of our initiation and daily practice is to explore how to live in harmony with the opposites inside, as well as outside, of us.

This process of ‘softening' our former extreme convictions is not usually recognized as a good thing. To the contrary, we often experience it as a loss of passion, We think we are growing soft, or “wishy-washy” with old age … and feel ashamed or cowardly often when we lack the passion of our former convictions.

However, what may, in fact, be happening is simply a maturing wisdom within that no longer feels the previous driving compulsion to prove ourselves right! Rather than squaring off against the other side and proclaiming to the rafters our position on everything, we let go of our need to defend or justify our position, we no longer need to make them wrong so we can be right. We relax and begin to explore these well-defended convictions more closely.

Having traveled so far inward, away from our former outer & historically polarized positions in life, we now find ourselves rubbing elbows with the very ones we so bitterly stood in opposition against. As we intermingle with the “other side,” we come to see how faint is the line of distinction between ourselves & those we previously considered to be unworthy and ‘wrong.'

There is an increasing surrender and trust …

… and at that point, just before the union of opposites occurs, we are crucified.

The wrath of the opposites, both sides, is turned on us. Even those we previously considered to on our side, blame and attack us.

Why? For several reasons – one simple reason is because humans tend to attack whatever they don't understand. We, humans, turn against what we do not know or understand; if it's unfamiliar, we tend to see it as the enemy. We have changed, becoming an alien in our home country because we no longer think the same. The other side sees us as an infiltrator who poisons the “well of truth” (i.e. their own unquestioned convictions). We are seen as turncoats, and strangers, and the enemy. We experience what it is to be crucified.

I think perhaps this is a place on the spiritual journey of maturationthat we must all pass through.

Jesus was a powerful example of this place called crucifixion. His walk was one that shed much light on what can occur to those on the path to spiritual maturity if they dare to live in the gap between opposite extremes.

Not being able to understand why Jesus did what he did, his own disciple, Judas Iscariot,  betrayed his master by turning him over to his enemies (the other side). Of course the other side saw Jesus as a threat, precisely because his way was Love that brought people from all walks of life together in peace and healing – such an approach would take their control over others away and could not be tolerated.

In total surrender, without blame, Jesus modeled what it is to walk in peace with Reality. Aligned with Reality, He saw all men as equals, and saw himself as a servant in humble obedience to his Father. His was a path of peace, even in the midst of crucifixion.

It seems to me that our journey of spiritual maturity is bound to be a combination of both crucifixion and surrender. Perhaps one is required before the other can happen.

I pray you might decide to surrender and go where Source leads … to do so is a total love adventure, as well as a humbling ride.

May you give your self wholly to the whims and designs of Source, and like Rumi, accept with complete gladness even blows at the hands of Source, just to be in the Presence of Love, Reality, and Truth. 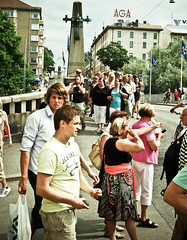 I forget who I am all day long.

But there's a difference now.

Now I remember that I am forgetting

And I return to remembering — 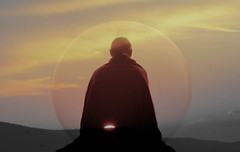 END_OF_DOCUMENT_TOKEN_TO_BE_REPLACED

The Universe is always mirroring to us our current beliefs …

For instance, if I think I don't have enough time, then – of course, I will end up getting stuck in traffic or being caught at every red light or waiting in endless lines, (etc.) thus validating what it is I believe.

This applies regardless of what our beliefs are. Our current situation is the fleshed out version of what we believe.

This is how the Universe makes our beliefs visible – for our viewing pleasure – for heightened awareness ….

Our beliefs become that which we encounter in three dimensional form. This is the Universe working with us to increase our consciousness. It is simply the way of it.

Blessed are those who understand the Way of it, for they shall know peace.

May you be so blessed.
Lynne