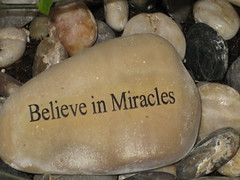 We get addicted to our painfully limiting conditions and forget that they originated in our mind – with our thoughts/beliefs. We think we are at the mercy of our conditions, when in fact, we are only as controlled by them as we believe ourselves to be. This is because it is our thoughts that set the energy tone for our whole life expression, mentally, emotionally, AND physically.

We think we have to settle for the diagnosis we've been given, we limit our chances for healing to what the “professionals” prognosticate. Too often we fall for a limited notion of what is possible for us and in that way we limit the power of Source.

We cannot change or heal unless we believe we can.

We are not our conditions.

We are not our diagnoses.

There is no limit to what Source can do. It is unlimited.

It is only our lack of belief that limits our possibilities. We forbid miracles when we withhold our belief from Source.

It is only our own doubt that prevents us from being delivered from our conditions.When we believe our limitations are the final word, we sentence ourselves to living with them.

2007-08-13 4:02 pm
Out of the blue this morning, I invited my son to walk the Camino Pilgrimage in Spain with me and he agreed. I am still marveling over how it happened. I've been in this process of deciding to go or not to go for months … three times I decided I was not going — it's too expensive and difficult on a body still recovering from a recent health issue, I told myself. But then I would notice that I was continuing to prepare for the journey, as if I'd never decided otherwise. I spontaneously (I thought at the time) joined a local gym and got a personal trainer. It wasn't until he asked me for what my goals for strength training were, that I heard coming from my own mouth the words, “I want to train for a walking pilgrimage.” But even still I continued to mentally waffle — “Should I go alone or with a tour group?”,  “Was I strong enough physically?”, “Should I really spend that much money?” … ran the mind talk. Finally I gave myself a deadline for this past weekend to book it or not.
A small group of students came up to spend the day with me on Saturday. I led them in a process of inquiry around a personal dilemma or issue … I too participated … using my question about whether or not to go to Spain.

I love seeing how quickly the Universe responds to our questions and inquiry …. I love the Universal Design. .. seeing how resources appear exactly when they are needed – truly everyday miracles. I also am awed by how often what I am “teaching” is actually as much for me as it is for my students. The learning comes through me to others. I am not the source of the wisdom that comes, but merely a conduit. As a “watcher”, I, too, benefit (perhaps more, at times, than the students). One of the most profound teaching principles is that everything “out there” is a reflection of my inner state … therefore, those who are drawn to us will be those who will best reflect what we need to learn. The answers that come to the questions asked by others will be as much for me as for them. And so, it was inevitable, I suppose, that the process I had “come up with” to lead my students in on Saturday was one that also happened to be exactly what I needed!

After each person wrote up a detailed description, as instructed, of the issue that they wanted clarity around … we began to make a list of all the various resistances we could name and write each one on a little piece of paper which was then folded and dropped in a bowl for later.
Resistance is anything that helps us avoid acceptance – the demands and excuses we use to justify our inability to accept life as it is. The group of us came up with 36 resistances and felt we were just getting started good… some examples are; resentment, guilt (the “should's/shouldn'ts”), denial, confusion, busy-ness (as in, “I don't have enough time to be here right now”), judgment, impatience, fear, superiority, comparison, inferiority etc. etc. Resistances are low-frequency-emotion generators. This means that when we indulge in resistance of any kind we are generating a dense or low energy feeling response that then gets projected out onto life happenings. In other words, we will see in our lives the concrete result of our resistant thinking. Resistance is also what the “me” story generates. When ever I'm being run by my personal, limiting story (“The world is not safe …”, “I'm not lovable …”, “I don't deserve …”, for instance) I generate a low frequency internal state that actually resists the high frequency energy of Source. The “me” story creates a dense energy that quite literally blocks access to Divine Flow and Abundance.

I asked each student to draw at least 5 resistances out of the bowl and then journal about how those applied to their stated inquiry. We then drew a tarot card and with all that data fresh in our minds we went outside and walked the labyrinth.
For me, what became clear in the labyrinth that morning was how much fear was up around going to Spain … the resistance I pulled out of the drawing bowl read “fear of loss” …. and that said it precisely. I allowed the fear thoughts to surface as I walked the circular path laid out before me in stone; fear of losing my health (It be too hard on the body)… wealth (I really shouldn't spend so much money on travel) … of being deprived of Universal Support (“If I make the wrong decision, the Universe won't protect me”) … and deep under it all was a fear(and hope) that I might lose “ME”… maybe be so changed by the experience that I lose my whole identity.
But then, that is what I'm after, right? I heard the mixed internal response — there was a simultaneous yes and no happening inside my mind. Yes, I want union with Source but I also know that everything I think of as me (the Lynne story) must be surrendered for that to happen. And that me does not want to be surrendered! Thus, defines the internal debate. Every day I set the intention to align with the highest frequency possible (Christ Energy) so that opposition of every sort might be dissolved – and thus more yes to surrender than no to resisting it. But I am where I am. Learning patience with myself has meant allowing the process to be where it is in me at any given point … it means going along with where I am in the moment and trusting that, with compassion towards self, sure guidance and clarity will come. Thinking this, I sighed out loud and looked up from the path to notice the beautiful day. The sun was bright and warm even as the brisk breeze whipped around me pulling at my alpaca poncho. It was windy and clear … and suddenly my mind was as clear as the day. I felt it clearly. The decision had been made. I am going to Spain!

It was clear to me that only ego fear was holding me back and I will not allow ego to determine my life. I could further see that the Camino pilgrimage would provide a wonderful laboratory for me to consciously practice the Universal Laws and witness pretty immediate results. I can imagine that I was going to get to see a quick manifestation of my own thought energy. As I continued to move through the labyrinth, I made conscious my intention to bring complete focus to walking the camino with Source – without distraction. I decided I was willing to place myself in the hands of Source in a foreign place where there are no familiar patterns of life to fall back on. That morning in the labyrinth I decided that I am going to Spain on a mission to surrender everything I'm capable of releasing. And yet I noticed a real reluctance to believe that might be possible – After all, I've seen how often pursuit can lead us away from rather than towards what we think we want.
So I'd decided to go. And then I further decided to go alone, rather than as part of a tour group. This after all is a personal/spiritual pilgrimage and I don't want to be sidetracked by too much “socializing”… Besides I want to be free to set my own pace, I decided … I want plenty of space for inward listening. So that's settled… I am going to Spain alone. Still, I noticed that I wasn't completely at ease … going it alone felt abit heavy.
So then two mornings later, which was this very morning … my precious 37 year old son, Andrew, called. And I told him I'd decided to go to Spain in July. His ears perked up immediately. He started asking questions and before I knew it, I'd invited him to come along … and to my total amazement, he said yes! He said he had been watching videos on Spain and had even considered going there to live for awhile. I had no idea!
As soon as he said yes, I knew it was a perfect plan for him to come. Who, if not my own flesh and blood to better understand and share my mission for this pilgrimage?

It appears to me now that the decision to go had to be in place before the next stage of the plan could unfold. Setting the intention to go signaled the Universe to proceed. And it is occurring to me now that perhaps it was also necessary that there be a manifested willingness to go alone. That's somehow important too, it seems. Just the willingness to take action is sometimes all that's needed. So now, just when I had settled into the idea of traveling alone, the Universe sends the perfect travel mate – who just happens to be my son! Not once, in all my thoughts about going with someone to Spain, had it entered my consciousness to invite my son. It simply never registered as a possibility.
I am realizing as I write that years of interpersonal clearing between us has prepared the way for us to do this walk together. We have established a sense of ease and comfort in being together that bypasses the surface stuff. We are able to take space and be upfront about our needs and wants with each other. He is the perfect travel partner for me on this trip although I had not thought to entertain the idea before now. There is clearly another Will at work – that is abundantly evident – and I love knowing that! I think about how many times I've wished that my son and I might have an opportunity to travel together sometime … I've been able to travel some with both daughters. Now, here it is, a totally delightful and surprising opportunity to spend 10 days alone together on pilgrimage… how can it get better than this?

Life is good … everyday there are miracles … which are simply everyday happenings that validate the ongoing dialogue we're having with a responding, benevolent Universe. Source listens and answers … if we but know how to ask and recognize the responses.