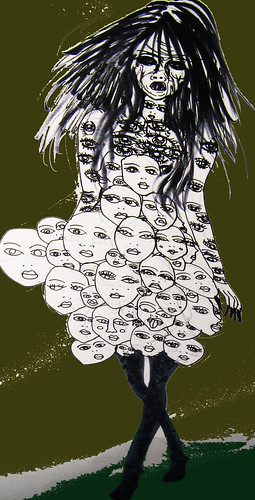 We all have a part of us that focuses on the negative and generates resistance to life in the form of negativity. I call that part of us, the “victim ego.”

The victim ego is the part of us that is in constant resistance to the world, with thoughts like, “I didn't deserve that, it's not fair” and “Look what they did to me,” or “They're trying to take advantage of me!”

When we automatically believe everything the victim ego says, we are miserable ALL the time! Meanwhile, the victim ego is quite happy with our negative state of mind because its main course of nourishment is resistance in the form of unhappy feelings! The victim ego is strengthened by negativity.

Listen for the “should/shouldn't(s)” in your speech. The victim ego has it's own particular vocabulary that consist of words that blame, induce guilt, and speak of times and places that only exist in the mind – like the state of “Shouldville” – the hometown of the victim ego!

Listen closely for your own should's and question them. (Byron Katie's Four Questions and Turn Arounds are an excellent model for questioning our thoughts)

For example, “She shouldn't be so controlling.”

When I believe she shouldn't be the way she is, how do I feel? How do I respond to her when I think she shouldn't be who/how she is? How do I see her? How do I treat her? What sorts of behaviors do I resort to? What would be different if I didn't have that should about her?
And finally, what's the exact opposite of that “should” about her?

“She SHOULD be so controlling!

A universal truth that applies to such situations, says, “We judge and resist the very things in others that we have condemned and denied in ourselves.”

Knowing that, we begin to use the resistances & negative judgments we have towards others to locate where in our own minds that judgment lies. We do it in the name of self-forgiveness and understanding. It brings us compassion for ourselves & others.

I have recognized the power of using my own negative emotional reaction as a doorway into dissolving old story. There is another powerful “story detector” available for our use in the clearing process … our behavior. How we act comes from how we “see things”; in other words, our behavior comes from what we believe. Learning to watch our behavior without judgment is a powerful tool for consciousness.

For instance, let’s say I believe that I need to write a letter, but I don’t do it. Perhaps it’s something I tell myself is very important, but I just don’t get around to it. As a matter of fact, I get defensive if anyone brings it up to me because I think I “should” write this letter and I don’t want to be reminded that I haven’t done it yet! There is guilt when ever I think about it but that doesn’t help – as a matter of fact, if anything, I’m further away from writing that letter than ever.

Just like painful negative emotion, behavior sends a message. It too, signals when there is a story running.

Most usually, what we do in situations like this is to get caught up in “feeling bad” about our behavior; “What’s wrong with me? “I can’t expect to ever do well in life with bad habits like this … I’m just a procrastinating ‘ne’r-do-well’ … blah blah … ”. The behavior endures and we spiral down into feeling worse and worse about ourselves.

Judgment is ego’s way of distracting us from examining the story. As long as Ego can keep us in judgment mode about the behavior, the real “culprit” – which is the underlying story – runs unchecked.

We have to behave the way we do as long as we believe the story that prompts it. Behvior always comes out of a story. Period. This is just plain and simple truth. Don’t take my word for it, check it out for yourself.

Take a minute to think about something you do currently that you define as a negative behavior. Now, instead of judging it as wrong or bad, ask yourself this question, “What is the underlying thought, belief or story behind this behavior?” Don’t waste time trying to describe or defend your outer behavior. Instead follow the behavior in as a way to locate the story behind it.

What happens to a procrastinating behavior like what is described above when we use an internally based process? Instead of blaming, defending or using the behavior as a way to generate shame (which is “food” for ego), we learn to use the behavior as a way to detect the story behind it. We ask ourselves questions like; “What thought am I believing that would prompt me to act this way?”. This helps me locate the unexamined story that’s operating behind the scenes. Once I’ve found the core belief underlying the story, I commit my attention to clearing it. How? This is where Katie Byron’s four questions prove to be SO useful! (www.thework.com) Asking those simple questions; “Is that true? … “How do I react when I believe that thought?” “What would be different without that thought?” -allows us to step back from unconsciously believing something that prompts me to act in undesirable ways. This gives space for grace to enter. Something else becomes possible.

As long as ego can keep me focused on my negative behavior it can keep running the old story. This strengthens the egos’ concept of a limited identity called “me, the procrastinator” (“oh, bad me!”). As soon as I begin to question the faulty premise behind the negative behavior, something shifts. The behavior becomes a reflection of the inner correction that often occurs automatically when through the clarification process.

I am now free to write – or not write – the letter, based on what is realistic and appropriate for the situation and there is no judgment either way. Understanding has replaced judgment. Thanks to the undesirable behavior, more story has been cleared – I am more free as a result. This is right relationship with our behavior. Rather than judge it, we practice utilizing our “bad habits” as teachers – indicators of story. In this way we shift from being externally focused on form (behavior) to being internally focused on clearing the way for Source.