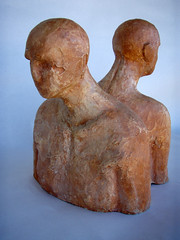 Often in therapeutic circles we speak of “carried feelings,” a concept that refers to how clients appear to carry the unresolved feelings of one of their family members. For example, we may say that someone is “carrying” their dad's anger or their mother's sadness. I have often seen evidence of this sort of emotional transference. But upon closer examination, I have concluded that it is more the “story” or beliefs, rather than the feelings, that get “carried” from generation to generation. What appears to be “carried feelings” is, in actuality, the natural feeling response that comes from believing the “stories” we have taken on as our own.

I refer to this notion of “carried stories” as “lineage beliefs/stories.” In other words, we inherit the beliefs/ideas/stories of our parents/caregivers which, when believed, invoke in us the same emotional responses we see in them. We absorb these “stories” as our own and never question their validity, even though they may not be grounded in reality at all! We believe them and then suffer the emotional consequences that come with believing them.

For instance, my father had a “story” about women. He saw them as unsafe and untrustworthy. He exhibited his distrust of women through distancing behavior, often exhibiting irritation in his interaction with the females around him. My brother appeared to “carry” my dad's feelings about women, acting much the same way towards women as dad had. No amount of trying to control his feelings helped. It was only as he began to recognize and question the “story” he had “inherited” from dad about women that he was able to make significant changes in his feelings towards women.

What stories and beliefs are you carrying from your family of origin?

I don't think it works, nor is it helpful, to talk ourselves out of our feelings! Feelings are never “bad” or “wrong!” They simply report our “vibrational frequency.” Feelings inform us of our present emotional state or “mood.” With that information we can then decide if we need to initiate, what I call, a “frequency adjustment.” This means we follow the feeling in to the originating belief or thought behind it and explore that belief through inquiry. (see Byron Katie's four question/turn around process of inquiry at www.thework.com)