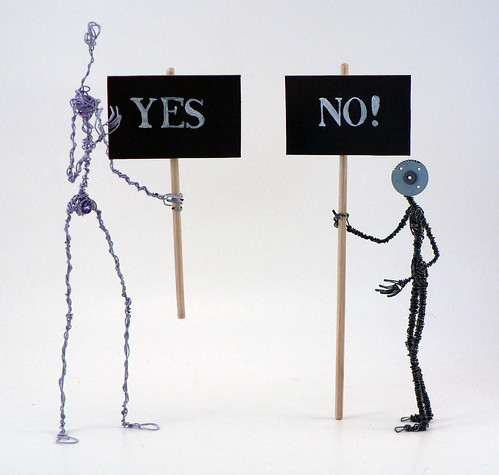 Recently, some of my group members, inflamed by Sarah Palin’s nomination as Vice-Presidential running mate for John McCain, asked me how I manage to stay calm and centered during heated political times such as these.

I’ve included here some of the thoughts I shared with them, with the hope that you may find them helpful in navigating the political waters through the weeks that remain in this presidential campaign. These principles apply equally to both sides of the aisle regardless of what political party you support.

Maintaining your sanity and peace-of-mind whether your favorite candidate wins or not.

The first thing to remember is that your negative reaction always belongs to and is about you.

All of your stressful feelings come from what you are thinking and believing. No matter how tempting it is to think that you are upset because of something that was said or done in the political arena, it’s simply not true.

External happenings do not control your feeling responses – your mind does. It’s what you’re telling yourself about that situation that triggers your emotion – not the event itself.

This means that every time you believe the resentful thoughts you’re thinking about the political candidate you hate – thoughts such as, “She’s cramming lies down my throat …” or “they’ll ruin our country …” – you’re in victim mentality.

Remember, it’s victim mentality that has you thinking that your misery is generated out there … and leaves you feeling powerless and reactive.

The truth is that what you’re reacting to is really an internal judgment you’re holding against yourself.

In other words, your reactivity comes straight one of your own unquestioned beliefs which you have projected out onto the other person or situation. What you are judging in them is something you have judged in yourself that is now being reflected back to you.

Your stressful reaction is simply informing you that some denied part of your own mind – some painful belief or unresolved judgment towards yourself – is being brought to your attention.

This means that your negative reaction, as unpleasant as it may be, is actually providing you with an opportunity to see the external person or situation that you feel so negatively about as a finger pointing back to the real cause of your unhappiness – which, again, will always be within your own mind.

The spiritual principle behind this idea teaches that the external world is always a reflection of your own mind. Always.

As I was sharing these thoughts with my group … I heard one of the women in the group suddenly groan out loud in self-recognition …. When I turned my attention her way, she began to speak out loud her judgments towards Sarah Palin, saying “I’ve been disgusted by her because what I saw was someone who got where she is in the political arena solely on her“cuteness”.

I told myself that, just because she’s an attractive and precocious woman, she’s been able to rise to power ….

Just this morning I heard them talking on TV about her glasses and I wanted to scream – “Who cares about Sarah Palin’s glasses?!” My client then went on to say … “But as you were just talking about how others reflect our negative judgment towards ourself, I suddenly realized that the judgmental thoughts I have about Palin are indeed the exact same judgments I’ve carried towards myself! All my life, I’ve told myself that the only reason I have what I have is because I’m cute! I’ve projected my beliefs about myself on to Sarah Palin. These thoughts I’ve been thinking about her are actually my own unforgiving thoughts about myself!”

This is how it works.

Here’s another example from the other side of the aisle:

A young man was complaining about Barack Obama. “He’s an elitist”, he said. “He’s one of those guys who’s never had to experience life in the trenches….” My client continued in this vein for a little while before I was able to finally begin to turn his attention inward, to his own thinking. I asked him what his judgments about Obama reminded him of from his own life. He began to talk about his early high school years when he felt he had been excluded from the “cool crowd”.

“I could never fit in with the “cool kids” – I was never accepted by them – as a matter of fact, I felt ridiculed and put down by them”.

“So, what did you tell yourself that meant about you?” I asked.

He reflected a moment, and then replied… “I told myself that I was nothing to them … that I wasn’t important – that I didn’t matter unless I could belong. Since I didn’t have what it took to get their approval, I suppose I decided it was better to hate them than to think I would never matter.”

“But who was it that decided you didn’t matter unless they accepted you?”, I asked.

He paused. I could see his mind working….

“I guess it was my decision about myself”.

“And when you tell yourself that you don’t matter, who is it that is looking down on you?” I asked.

“Yes, I said … “it sounds like that’s your elitist mind determining your worth. Is it possible that you’ve spent your life hating and trying to guard against “those elitists” out there, when in fact, it’s your own internal elitist that you’re really trying to protect yourself from?”
His eyes filled suddenly and we both knew we’d hit upon the real source of his ire.

I have yet to find a judgment that I’m carrying towards someone else that didn’t turn out to be rooted in my own negative assessment of myself.