Lessons About Reputation from Skunk 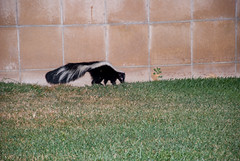 Years ago I was, for a short intense while, under the tutorage of a man who professed to be an American Indian medicine man. He went by the name, “Natamenaha,” and he taught me to pay attention to nature and the messages she sends us. This past few weeks, skunk has brought me a few valuable insights that I thought worth sharing.

Daniel and I had three ‘encounters' with skunk, all within a couple of weeks. In Indian folklore three encounters with the same animal is seen as highly significant, indicating that Nature is working hard to get our attention. The first encounter took place on our morning walk to the bluff. Striding along beside one another, with our two country chow dogs running point, we came upon a huge ‘granddaddy skunk.' He was waddling, at a leisurely pace, across the trail in front of us. Our dogs, (who, true to their hunting nature, think any small animal is game for their hunting pleasure) immediately trotted up to the skunk while we held our breath in hopes that there would not be a ‘scene.' The old skunk turned and faced them head on, with no show of fear at all. The dogs and he sniffed noses, and then the old skunk turned and ambled off in the same direction he'd been going before he had been interrupted. We breathed a sigh of relief. (If you know anything about skunks, you know why we were relieved! They have a reputation that lingers!)

Daniel & I talked about how unusual it was to see our dogs greet rather than chase an animal they encounter in the woods. We laughed about how the dogs seemed to have heard about the skunk's reputation! They knew better than to get on the wrong side of that old fella.

We talked about how our reputations can serve us in similar ways, protecting us from ‘unsavory' happenings. Later, after returning home, I looked up the skunk in the Medicine Card deck and found that the skunk does indeed carry a message about reputation! I reflected on my own reputation: about how quickly word can spread about us, both positive and negative. I thought about the importance of having protective boundaries (like skunk) that allow one to move freely and safely through life.

A few days later, a second reminder of skunk's presence showed up, when Daniel commented that he had been smelling a skunk in close proximity to the house. The dogs too were alert to its presence, although we did not actually see it. I was becoming increasingly alert to ‘skunk medicine.'

The third encounter was yesterday morning. Again, Daniel and I were on our morning walk with the dogs. This time, the dogs spotted the skunk (a much smaller one this time) trotting across the road before we did. By the time we figured out what was happening, our old dog, Shiloh had that skunk in the death shake dogs use to break the neck of their prey. We were yelling, “HALT” and “NOT FOR YOU!” and every other thing we could think of to get her attention but we might as well have been on another planet as far as either dog was concerned. They could not hear us. Instinct had taken over and both dogs were now in the fray. We heard Shiloh give three sharp yelps of pain and knew she'd been hit with skunk stink, but even that did not distract her from her intent to kill. The dogs made short work of their prey and we were left to deal with the aftermath of two dogs who reeked of the intense and cloying scent of skunk.

Afterwards we discussed the episode at length. In their first encounter with a skunk the dogs seemed respectful of its reputation as a force to be reckoned with, as something they felt no desire to mess with. But its reputation did not save the next skunk they encountered.

I got it. The message was loud and clear; our reputation will not save us.

It does not matter how well respected, or how well liked we are, our reputation cannot save us. Getting the approval of others will not keep us healthy, or protect us from bad things happening. or guarantee us happiness. And if we start thinking we're somebody because others think we're a somebody then we're lost for sure!

It is dangerous to become reliant upon a reputation no matter how carefully we have built it. Getting caught up in needing to impress or to be distracted by thinking we are impressive leaves us on shaky ground. Indeed it is not unusual for the very people or circumstances that were previously so favorable to turn on us, dashing our reputation to the rocks.

We must come to rely on something more dependable than a good reputation.

It is better to entrust ourselves to a Universal Source that prompts our responses to life; it's better to focus our attention on praising and pleasing that Source and leave our reputation, good, bad, or indifferent, for others to worry about. Their thoughts about us are not our business anyway. People will think what they think and it is a waste of our time and energy to spend time trying to shape their opinion of us. Building a reputation is a misguided attempt to control the world's opinion of us and it prevents us from being truly available for Source to prompt and use us for its own purposes.

Such reflections on reputation came to Daniel and I from our three encounters with skunk. I take these message to heart, especially since these days my own name is becoming more widespread through the marvels of internet. Perhaps I am being reminded not to let reputation-building, or seeking fame drive me. I am being asked to remember that having a recognizable name will not keep me in right relationship with myself, the world or Source. I am grateful for such ‘natural' reminders.