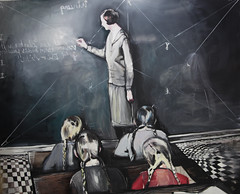 I read somewhere recently (Oswald Chambers, maybe?) that it's time to take the concept of obedience out of the mire and reclaim it as a worthy act …. I've been thinking about that idea off and on since.

Been asking myself, what does it mean to act obediently?

Here are my thoughts:

When we comply we may follow the rules, but we will do so from a place of duty, resentment or fear. Like the little girl who sat down when her father commanded it, but admitted later that “I was sitting down on the outside, but I was standing up on the inside!”

If we feel forced to do something we may comply, but we are resentful and resistant about it. When we feel strong-armed, coerced or guilted into following someone's dictates, we may go along with them; we may reluctantly do what's required just to “get them off our back” (we are passive-aggressive), or we may comply as a way to avoid punishment (we are fear-based), but one thing is for sure – when we comply, we are in victim consciousness.

Obedience, on the other hand, is an act of freedom: obedience is the spontaneous act of saying yes to something (or someone) that we believe in. To come into obedience means to align our will with something we respect and trust wholeheartedly to the point that we do not hesitate to obey its dictates. Obedience cannot be forced.

We choose freely to obey that which we have complete confidence in. We obey from love. Obedience is the act of a mind free from any vestiges of victim consciousness.

Obedience is not a sort of “rote following after,” nor is it done from a place of fear or recalcitrance. In obedience, we chose to believe in a particular path or set of principles and/or to follow a teacher who professes and exemplifies such principles, not from a “less than” status, but from a joyful recognition that there is something being offered that we very much want to embody in our own lives.

To be obedient means to set our sights on a vision or on a model of something we long for so much that we are willing to do whatever it takes, whatever that is, to achieve it.

Obedience is the natural and healthy response of someone who is humble enough to be teachable, open-minded enough to accept life's teachings in whatever form they come, and motivated enough to hear and obey the inner promptings of a higher self and Source.

Which are you? Are you more compliant, going through each day grumbling because you have to work a job you hate or grudgingly doing the bare minimum just to get by? Or are you obedient? – so attuned to and desirous of serving a higher good that your heart leaps to obey your innermost promptings? May it be so.

May you find great willingness to follow and obey truth wherever it appears in your life and may you find the ability to give yourself wholeheartedly to Source.