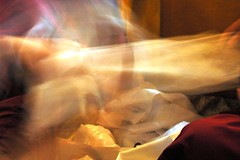 Watching and questioning my inner thoughts is a process I apply daily to my personal reality. It is a process that allows me to make peace & realign with Reality in regard to my own innermost struggles (like the one I described in my previous post triggered by a recent nightmare). I have come to see inner struggles for consciousness as an essential part of clearing our way towards a more peaceful state of mind. This way of understanding struggle helps us dispel the need to blame or judge ourselves, or others, for our uncomfortable state of being, and instead frees us up to explore the messages, opportunity and gifts that our struggles offer.

For instance, when I was dealing with the low-frequency residue left over from the nightmare I'd awakened from, seeing struggle as a valid part of the process allowed me to operate from a place of self-acceptance, so that, rather than shaming myself for having such “unevolved feelings,” I was able to focus on identifying where I was still living out of victim UNconsciousness instead!  I was able to explore what my nightmare had come to say to me.

That process of witnessing my nightmare, instead of trying to deny, or get rid of it, allowed me to explore its message. As a result I was able to see that my nightmare was a much magnified version (obviously it had to be big to get my attention! :)) of my own tendency to rail against Reality. I saw how I was living out of a story of lack that had me believing that limitation was just “the way it is,” and the repercussions of believing that story were being played out in vivid technicolor for me to see through my nightmare. (How grateful I am that I was given the opportunity to deal with it first on the inner plain, through the dream world, rather than having to experience it in waking life!

I suddenly could see the lack of appreciation to, and the lack of faith in, Source that my limited belief system portrayed! Such an attitude, based on fear,  could only generate more scarcity and stress. I could see that my nightmare had come to give me a vivid reminder that I needed to adjust my internal fear-based whining from, “what am I doing wrong that's keeping me from experiencing more abundance?” to a focus on gratitude for the abundance that is present, right-NOW in my life!

Suddenly I laughed out loud as an image of myself as a four year old child whining about not getting what I wanted came to mind. I realized that I was still doing a similar sort of demanding from Source that as a child I'd done with my parents: “I don’t want blueberries! I want oranges! This is not what I want! Why can't I have more that this? Why did he get more than I did?” etc. etc.

And again, I felt the heat of embarrassed realization in recognizing how belittling to Source such an attitude of ingratitude is! It was as if I was saying, “Yeah, yeah, I see what You, Source, have done for me so far, but it's not enough! I know that you've given me the wealth of a lifestyle that is abundant beyond belief, BUT I want more! And it needs to be the way I want it NOW or else it means You don't love me – or maybe it means that I am bad, or wrong, and therefore undeserving. So FIX me!”

This awareness, brought to me by a nightmare, allowed me to adjust my attitude, so that I could open my heart again, and be restored to inner sanity and balance. My boot camp “nightmare” experience allowed me to reconnect with gratitude, and I feel deeply thankful today for the opportunity my nightmare offered me, and for having the tools to take advantage of that opportunity to walk into my own inner darkness and turn on the “light” again. Story-free, even for the moment, and I return again to a natural state of ‘enlightenment!' 🙂

(Enlightenment: those times when consciousness infiltrates our inner darkness and lifts the fog produced by our limiting, mind-made, and misery-making beliefs and stories that otherwise block us from receiving the Light of Source. As we clear the inner density, we bring more of the light of Source in so that others can literally see the Light of Consciousness pouring through, and around, us. We are, in that moment, enlightened.)