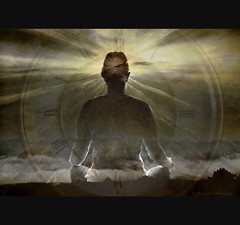 I had a profound healing experience this morning during my daily practice while listening to a guided imagery on a CD, called “Deep Relaxation.” by Cathy Lumsden.

I had completed my hatha yoga practice and was lying, deeply relaxed in shivaysana. My attention was fixed on my inner body and I became intensely aware of the difference in energy between my right and left sides of body.

The left side of my body felt completely open, relaxed and completely pain free. No aches, no contractions; I experienced a seamless spaciousness on that side. Whereas the right side felt contracted and throbbed with dull aching, starting at my throat; I experienced “glutted” energy all the way down through my right sacral joint, hip and down into my right knee. I was very aware of the defined “line” of separation between my two sides. There was no doubt in my mind that the energy on my right side was blocked.

Being in a deep, meditative state allowed me to register what I was experiencing without resistance. I simply felt and “saw” the blocked energy. Soon my beliefs that are associated with this “wounded” right side began to surface.

“I am sick and probably won't live long,” seemed to be the main, or “core” belief that surfaced. As I continued to watch I could feel the impact of that thought on my body as the body contracted deeper into an embedded “knot-of-fear” behind my right shoulder blade. I recognized the place as being where I store my fear of dying.

Guilt surfaced as well, “I haven't take proper care of myself, now I must pay,” was the thought. My body drew up tight in response to that thought.

Such thoughts have surfaced many times since I was diagnosed, some years back, with liver disease. But it was not until that moment, in a state of deeply relaxed alertness, that I realized the blocked energy in my right side was caused by my body responding to my beliefs about the illness and not necessarily the result of the disease itself!

Holding my internal gaze on my body experience, I began to question the thought, “My liver is sick and dying,” using Byron Katie's “four questions and turn around” process.

I watched my body respond to those scary beliefs and realized that my tension and pain on that side was absolutely created by those painful, scary thoughts.

I asked myself, “What would be different without these beliefs?” Immediately my right side began to relax; the tension and contraction began to melt. I suddenly saw how, through contraction, I had been preventing life-giving, healing energy from entering my right side! Universal energy could not come in to cleanse, heal and rejuvenate as long as I continued to think thoughts that kept my organs and muscles clenched. I could see that, without the scary belief, I would be able to immediately increase my ability to breathe in healing energy.

I began to consciously breathe, taking deep breaths as if there were no limiting story to curtail the full, complete expansion of my diaphragm and lungs. As I did, I could see the sparkling light of Source “scintillating” through me; light energy radiated throughout my right side, penetrating and aerating my heart, liver, intestines, and all my internal organs on that side.

I felt great relief as I saw how I had unconsciously “barred the door” to the Energy of a Source that heals! In doing so, I had refused to allow Universal Source Energy to enter that ailing space. No wonder my right side had been feeling stagnant and in pain!

I became aware that my right side was where ego had “set up house” in my body; it was the domain of my ego. The line marking the boundary between ego territory and my “free” self was clearly marked! I could see the ego's need to keep me believing this story of disease – it was how it was holding onto its domain!

As I watched the light radiate through my body, penetrating places it had not been able to access previously, I felt the pain and discomfort, all the heavy energy in my right side, dissipate. As the contraction and blocked energy melted, my right side felt less and less distinct from my “free” left side until I could feel no difference at all between the energy on one side of my body and the other!

I felt the absolute power of healing as the thought arose in my mind, “In this moment, I am absolutely free of all illness. I am whole and well,” and realized that that thought is as true as I will allow it to be.

I choose to question any thought that takes me into pain or illness.