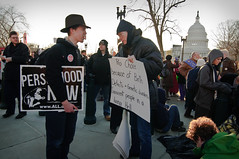 Here are some suggestions for dealing with someone who is angry or resistant, especially if they are reacting in a seemingly unreasonable or irrational way:

1. Rather than react defensively, find the grain of truth in their argument and acknowledge it. More than likely there will be something true in what they say, even if the majority of what they say does not seem so. Look for something you can agree on. This can go a long way towards easing the situation and makes it more likely that they will be able to hear what you have to say. As long as you're engaged in an argument of whose right and whose wrong, there's a good chance neither of you will be able to hear the other one. It's possible to allow them to be right (even if they are not perfectly right) without having to make yourself wrong (regardless of how they hear it).

2. Don't personalize their accusations or unhappy opinions. There's a good chance that the angry, blaming words they hurl are not about you, even though they may think so. Anger is generated by what we think and believe, not by what others say or do. We project our painful beliefs and ideas onto others and then blame them as the cause of our hurt and anger. Understanding that others react from their own beliefs, makes us less apt to personalize or need to defend against their judgments and opinions.

3. Contain your reaction, if you find yourself having an internal negative reaction or getting upset with them. Rather than automatically blaming and getting defensive like they may be doing, hold still instead. Refuse to react abruptly; give yourself time to examine your own thoughts more closely and find the real cause of your reactivity, To contain your reaction does not mean to deny it. Quite the opposite, we learn how to use the situation to learn more about ourselves. When we react defensively it generally implies that there is some truth to what they are saying. Defenses originate from the negative judgments we hold against ourselves. When we react negatively it's usually because we're afraid, on some level, that they might be right. Why else would we be so bothered by their words? Learn to listen with caring detachment (gained by not personalizing their words) and open willingness to hear what they have to say. Demonstrate for them the treatment you want from them. Byron Katie often points out how we so often expect them to give us what we cannot/will not give them. Demonstrate the respect it takes to listen without a negative attitude and the courage it takes to own your own part.

4. Rather than trying to defend your point, or set them straight, listen calmly instead. Being able to listen with calm detachment requires that we put our defenses aside. Such non-reactive listening is not a ‘lie down and roll-over' sort of approach (although many misinterpret it as such). It does not mean that we settle for abuse or that we agree with whatever they say just to keep the peace. But being able to be a non-reactive listener requires we be grounded in certain truths. We must know, and have faith in, certain guiding principles.

Here are a few of the main principles needed to achieve an inner state of calmness:

When we rely on such principles, we feel less prompted to react or take on their issues, we no longer need to prove them wrong or ourselves right. We don't need to manage their opinion of us which leaves us free to respond authentically.

5. When you speak, speak directly to the person behind the angry, defensive personality on the surface. Rather than argue with an ego personality who only knows how to defend, justify, or blame, speak respectfully to them, as if you expect them to cooperate and be reasonable. Nobody wins when egos are engaged in a whose right/whose wrong competition, so refuse to engage with them on that level. Let go of your demand to be right and speak confidently to them as one does a friend. For if you refuse to see them as an enemy they are much less likely to become one.

Practice these suggestions in your interaction with others and you will be amazed at how much your relationships with them will improve.