Being A Consciousness Junkie 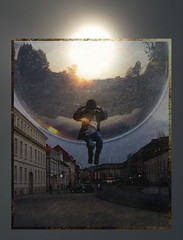 All my life I have been an avid student of anything having to do with defining and achieving higher states of consciousness.

Starting at the age of twelve, I read everything I could get my hands on of related interest: spiritual books like the Bible, Tao Te Ching, Bhagavadgita, and writings about the Cabala and Alchemy, as well as all sorts of philosophy, psychology, mythology, and esoteric books of every variety. I loved them all and they left me hungry for spiritual enlightenment.

I was driven by an insatiable desire to understand what consciousness is, how it works and how to attain it. One might even say I was a “consciousness junkie” because I was consumed with it. Exploring and attaining higher consciousness has unquestionably been my driving ambition in life.

I pursued all types of experiences to transform consciousness, including all kinds of journey work, breathing exercises, Native American rituals, fasting, chanting, ecstatic dance, etc. etc – not to mention the many early years of experimental drug use – all of it in the search for higher consciousness.

I wanted to “make” this enlightenment thing happen to me!

While my many practices – from meditation to dancing, singing hymns and prayer to practicing yoga and qigong, traveling to sacred sites and walking pilgrimage, fasting and feasting – all served me in one way or another, none of it brought about any sort of lasting enlightenment.

After more than forty years of experimentation in the field of consciousness I came to see that I was not going to be able to achieve what I was seeking through any kind of striving; I realized that the key was not to be found through the doing of a particular thing – that, as a matter of fact, there is no fail safe method or act of doing or practice that can guarantee us a higher state of spiritual consciousness.

Higher states of consciousness occur naturally as we step back from our automatic reactions, especially those that accompany our unhappy thoughts and beliefs. This stepping back allows us to access the role of observer (observer consciousness) which moves us out of our reactive minds into an observing state of consciousness and which allows us to see where we have been, even as we set our sights on where we want to go.

From observer consciousness we are able to set our direction without feeling compelled to figure out how WE are going to get us there. That's the surrender part. We learn how to set our intention, i.e. to hold our gaze on our hearts desire, even as we surrender the what and how of making it happen.

Instead we witness ourselves following the promptings that will deliver us to that fluid, alive state of consciousness. It is a flow we tap into rather than some sort of mechanical mental maneuver.